These short weekend breaks proved very popular when we launched our ‘Wartime London’ tour earlier this year. For convenience, we recommend a range of accommodation types that you can book and as walking tours, you simply meet us at the start of each day, we only use a Coach where necessary and the group sizes are usually no more than a dozen. Other options are also on the bench which include Civil War, and other Roman Britain ideas. 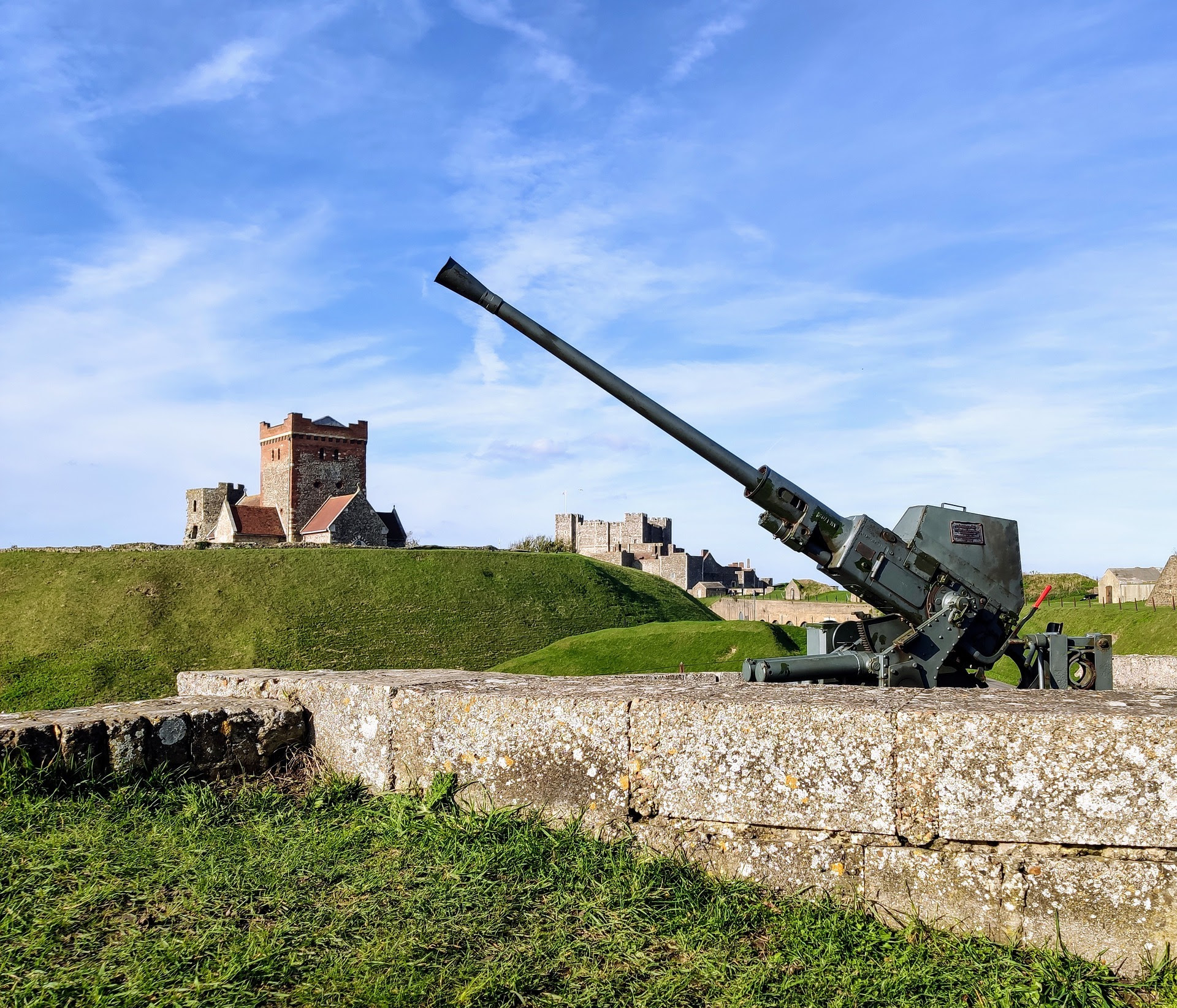 Often fleetingly glimpsed from the deck of a cross channel ferry, Dover offers a rich military heritage ideal to study through a series of walks and visits. Our weekend includes a walk around the town of Dover encompassing its many memorials & historic sites to tell the story of Dover at War, a walk along the eastern cliffs discovering the site of cross channel guns, Chain Home early warning system and the Dover Patrol Memorial. We also walk the western cliffs seeing sound ranging equipment and numerous pill boxes overlooking the channel. We finish with a visit to the Capel-Le-Ferne Battle of Britain Memorial, the historic Royal Military Canal and Shorncliffe Military Cemetery.
Saturday
Morning Pick-up from Ebbfleet and onward travel to Dover including a brief stop at West Malling to visit a flak tower to set the scene for the weekend.
Walk One - Dover at War, a guided wander around the historic port city to visit sites of interest & memorials connected to discover Dovers miltary past and its wartime story
After a short break for lunch we visit the site of Swingate Chain Home Radar Station and discover its story.
Walk Two - East Headlands Walk, starting at the site of the cross channel guns, 'Pooh', 'Dummy Pooh' & Bruce' we continue to the Dover Patrol Memorial, visit the site of a nearby rocket battery before descending the cliff path to the beach passing obervation posts and anti defence measures before ending in the shore to discuss the Foogasse 'flame defence' system. A pleasant pub awaits us before our coach takes us back to Dover.
Clive and Tony will be heading out that evening for a beer or two and chat about history should anyone want to join or avoid them!
Sunday
Morning meet in central Dover before a sort drive to Abbots Cliff to start,
Walk Three - West Headlands Walk, with spectacular views we stroll along the coastal path passing Shelters, Sound mirrors and battery locations as we discover these vital tools in Britains defences, we discuss the roll of the Observer Corps and discuss the Luftwaffe raids and sorties over the area. We then head to the nearby Battle of Britain Memorial at Capel-le-Ferne where we discuss the Battle of Britain, what it acheives and its cost. Continung onto Folkestone we vist a stretch of the Royal Military Canal and a Martello Tower to discover the defences in the area during the Napoleonic period before our final stop at the Shorncliffe Military Cemetery at Sandgatte.This fascinating CWGC plot includes 3 Victoria Cross recipients, a number of fascinating stories and the battle damage of 1939-45 war where it found itself in the frontline. After a leisurly visit we depart for Ebbsfleet and a final drop off late afternoon.

Tour includes:
Battlefield Guides throughout
4 X Historical walks and associated visits to sites
Entrance to museums/memorials
*Not inclusive of overnight accommodation and meals
A weekend event in London that will include a number of walks around the capital led by author Clive Harris & renowned London guide Steve Hunnisett.
The tour limited to 17 spaces will be assisted by Vox headsets to alleviate any traffic/city noises whilst we are on the walks.

Saturday 12 February
Walk One - Bank to London Bridge - A morning meeting outside the Bank of England/Royal Exchange (*Bank Station Central/Northern/District/Circle Lines) and discover the story of the City in wartime, passing the 'largest crater in London we pass through Leadenhall Market, Thomas Greshams glass masterpiece that amazingly was spared major damage throughout the raids. Passing the sites of numerous incidents during the Blitz, many of which were conveyed to Clive and Steve directly by veterans we reach the Tower of London, this world-famous landmark holds many a story with the scars of war still present today. Though much developed we continue along the pleasant walkway on the north of the Thames, passing Billingsgate Fish Market where we learn of how the Larder of London remained open, despite the raids, we consider the rivers close relationship and role with Londoner's during the bombing before crossing London Bridge with its stunning views of Tower Bridge, HMS Belfast and the City Skyline before emerging via the bridges surviving ancients steps at the historic Borough Market where free time for lunch can be taken.

Walk Two - London Bridge to St Paul's - Starting at Southwark Cathedral, whose heavy wartime damage was repaired and paid for by Harvard University, our afternoon sees us stroll takes along Bankside, passing the ancient Winchester Palace (the remains of which were uncovered when exposed to bomb damage), and walk the narrow cobbled streets that today house coffee shops and restaurants but were once warehouses and riverside wharfs during the war. Many still show the scars of nearly 80 years ago and hold incredible stories both tragic and brave. We cross the modern Millennium (Wibbly Wobbly) Bridge and continue up to St Paul's Cathedral, a route once proposed by Edwin Lutyens to be preserved as a ruined memorial garden as a tribute to Londoners who suffered in the war. This never came to fruition, yet today the impressive Fire Services Memorial commemorates men and women of both the NFS and AFS who paid the ultimate sacrifice national during World War II, set in the shadow of the dome of St Pauls, then can be no more fitting spot. On arrival at the Cathedral we make a comprehensive study of the incidents that occurred in the area during the war, we than pass through the completely destroyed Paternoster Square that offered its rubble up to fill the Mulberry Harbour during the Normandy Campaign, we then end the day at a Blitzed memorial garden in the grounds of Christchurch before retiring to a local pub for a pint a light buffet. (*St Paul's Station Central Line)
Sunday 13 February
Walk Three - Ludgate Circus to Trafalgar Square - Starting at Ludgate Circus (*City Thameslink Station or St Paul's Station Central Line), our morning walk takes us through the old city streets of the city, we pass St Brides Church, whose bomb damaged opened up the Roman Street level still visible today,  Dr Johnson's House in Gough Square that was commandeered by the AFS and used as a rest shelter for their crews during the war. We walk through the Temple and Pump Court, heavily bombed and covered with blitz damage to this day before arriving at St Clement Danes Church, now the church of the RAF and intrinsically linked to London's struggle during the Blitz.  Passing the Aldwych, home to the BBC during the war we discover the story of 'Auntie' and the role she played, we continue through to the West End to discover how 'theatreland' endured the war, passing many of its famous theatres, restaurants, pubs and churches before entering Embankment Gardens for a pleasant stroll among its memorials, many of which have wartime links. We end on the steps of St Martins in the Fields Church, a favourite spot among besieged Londoner's that offered a public shelter to people of all classes during the air raids. Freetime for lunch will be taken with many nearby cafes and pubs.

Walk Four - Trafalgar Square to Victoria Embankment - The afternoon will see us passing through the tranquil streets and leafy squares of St James, home to exclusive members only clubs and designer shopping malls, we uncover their wartime past and also discover the important planning centre for both Operation Torch & Operation Overlord in nearby Norfolk House. Crossing Pall Mall to Waterloo Place, still displaying shrapnel scars 75 years on, we cut through St James Park and learn of how the parks offered protection and resources for wartime Londoner's before reaching the Guards Chapel. This very moving spot was the scene for disaster on 18 June 1944 when it was struck by a V1 Flying Bomb, causing many casualties among its worshippers. We discover the uplifting story of Westminster Methodist Hall during the war in the shadow of many of Westminster's most iconic buildings including its Abbey, St Margaret's Church and the parliament buildings. Crossing Parliament Square, we pass Big Ben (St Stephens Tower), learn the story of the buildings during the war before ending, most suitably, back on the Thames at the Battle of Britain and London at War Memorial before dispersing to a local pub. Whilst not included, the tour conveniently ends located to the nearby cabinet war rooms that are open to 1800hrs should you wish to visit.
Planned finish on both days is 1730 Hours 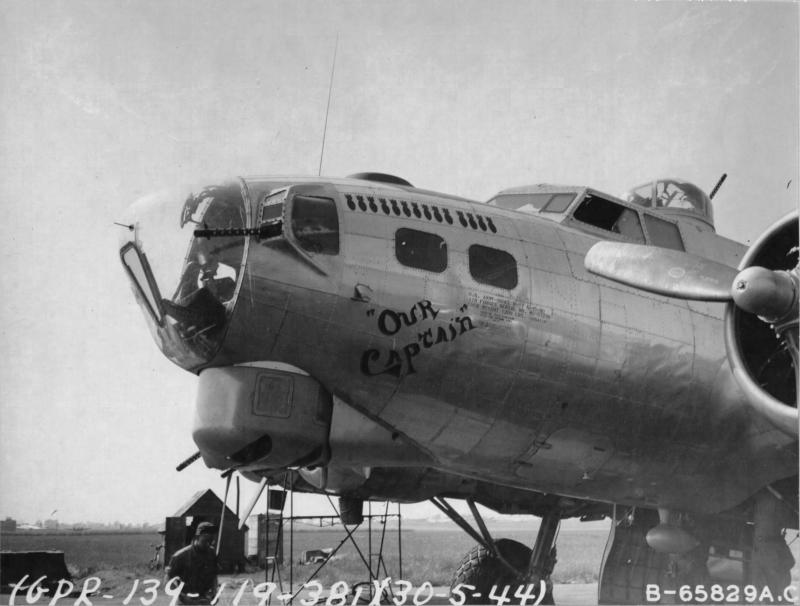 Tour includes:  Pick up/drop off in Cambridge
Coach throughout
2 x Battlefield Guides throughout
2 X Historical walks and associated visits to sites
Entrance to museums/memorials
*Not inclusive of overnight accommodation and meals
This new tour in conjunction with historian/author Stephen Darlow focuses on the joint efforts of RAF Bomber Command and the US 8th Airforce in and around Cambridge
Saturday
Meet in central Cambridge our tour starts with a day studying Bomber Command, first with a trip to Bassingbourne cum Kneesworth Cemetery, here we focus on the general background to the bomber offensive, considering airfield expansion and RAF aircrew training. We study a specific incident concerning a collision between a Luftwaffe intruder and No. 11 OTU Wellington from Steeple Morden.
We the head to Gransden Lodge airfield, from this seldom visited site we focus on Bomber Command's Battle of Berlin, notably the raids of 16/17 December 1943 and 24/25 March 1944. At the time of the raids Gransden Lodge was the home to No 405 Squadron RCAF, a Pathfinder squadron. We end the day with a visit to The Eagle pub Cambridge, a favourite haunt of aircrew during the Second World War, where its famous ceiling records the in-burnt names of those who served.
Sunday
Switching our attention to the US 8th Airforce we make the short trip to Nuthampstead airfield, from here we learn the general background to the USAAF 8th Air Force's entry in to the bomber offensive by focusing on the 398th Bomb Group and specifically their mission of 15th October 1944. We then have a private visit to the Nuthampstead museum dedicated to the 398th Bomb Group and the 55th Fighter Group. Lunch can be taken at the The Woodman Pub that contains memorabilia associated with the airfield. We then transfer to Steeple Morden airfield. We discover the history of the airfield, how it moved from RAF control to USAAF control and discover the story of the 'Steeple Morden Strafers' (the 355th Fighter Group) our visit will explain how the strategic air offensive targeted the Luftwaffe directly in 1944 and 1945. We end the day with a visit to Madingley American Cemetery, after spending time in the visitor centre we will visit the graves of some of the men mentioned earlier in the day. The coach will then return to Cambridge.